The visuals and themes surrounding popular TV shows have long provided the inspiration for creative consumer activations. But what about the sound?

Depicting sound was the unconventional goal behind FX Networks' recent SOUNDFX campaign, which featured outdoor, interactive sound installations intended to promote American Horror Story, Archer, What We Do in the Shadows and other popular FX shows now available on Hulu. Taking place in three cities throughout the month of September, each distinct activation was created by a different artist, who was tasked with creating a sensory, sound-focused experience built around the genres of drama, comedy and horror. 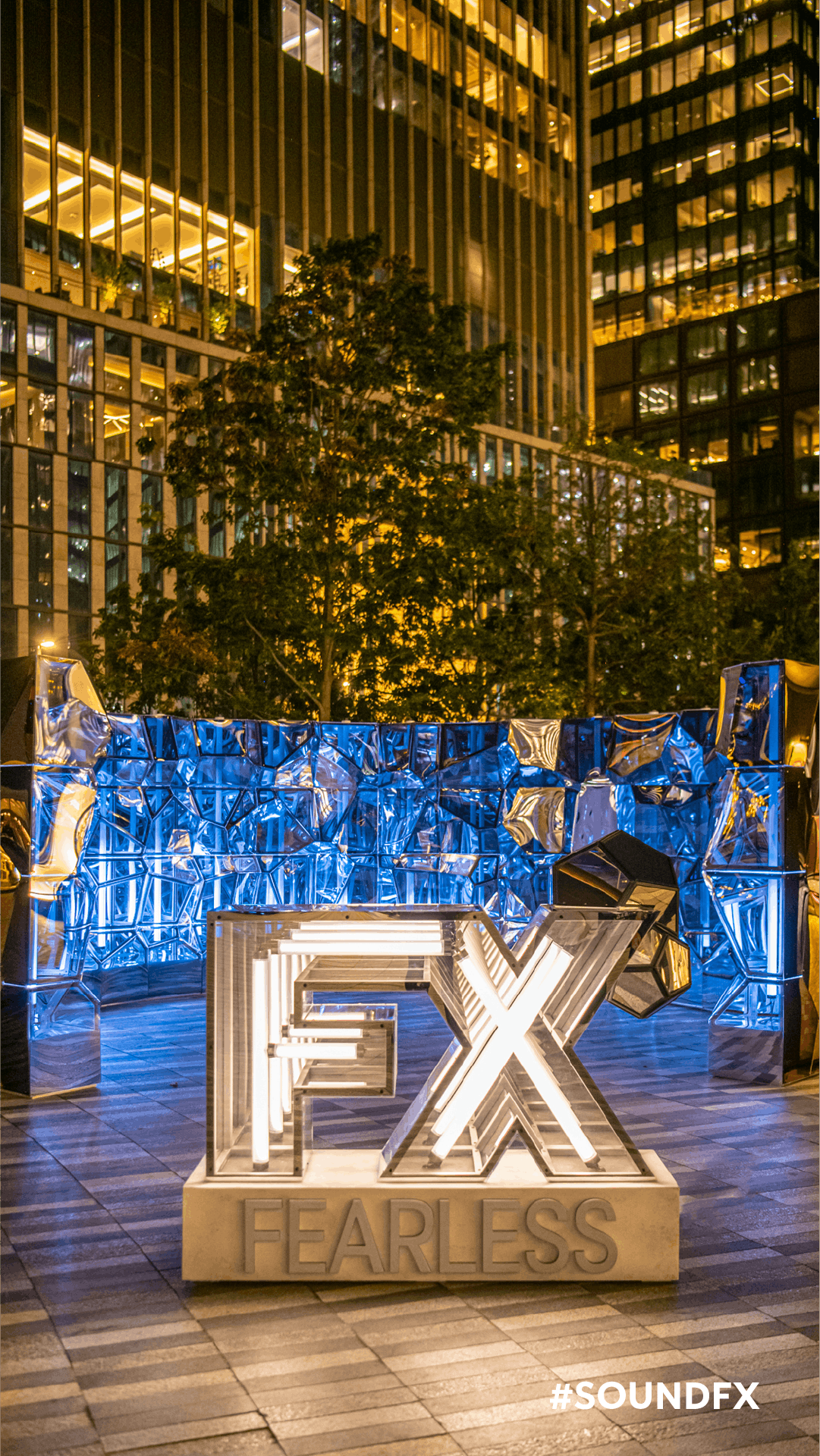 The New York installation, created by local design studio SOFTlab, focused on the drama genre.Photo: FXFX partnered with experiential marketing agency Creative Riff to develop the out-of-the-box experience. “We determined together that it would be interesting to focus on sound and create interactive art installations that are open to interpretation from a visual perspective, while also layering on immersive sounds specific to the different genres of each show that lives on the platform,” explained Ryan Coan, founder and CEO of Creative Riff.

FX's senior vice president Kenya Hardaway agreed. “We loved that the concept gave us the opportunity to incorporate music, soundbites and sound design in ways we hadn’t yet explored in an experiential activation," she said. "While engaging the five senses is something we strived to do as part of other immersive events, the element of sound had never been employed to this extent, making it the primary focus of the installation."

She continued, "Because series content is so focused on the visual, we often fail to acknowledge the impact sound has on what we see. SOUNDFX allowed us to explore that and create amazing art in the process.”

Of course, depicting such an abstract idea wasn’t without its challenges. Coan noted that the key was finding the best way to use sound to enhance a visitor's experience by encouraging interaction with the pieces. "We wanted visitors to do more than just look and listen, but to interact with the art piece and gain a sense of exposure to FX titles from attending the event," he said, adding that the team worked closely with the artists to make sure each installation was made accessible and distinct.

“The biggest challenge was to find a way to use sound to support the brand and highlight the diverse FX originals that inspired the art," added Hardaway. "Each installation told a story around a select genre, and ultimately, we selected audio from some of the most popular FX series in those genres. The shows guided the creation of the art and kept the experience rooted in the FX brand.”

The installations kicked off Sept. 9-13 in New York with a drama-inspired take from local design studio SOFTlab at Hudson Yards Public Square & Gardens. Attendees were surrounded by a crystalline structure made of two-way mirrors that both fragmented and multiplied their reflections, while also mixing them with sound-responsive lights that were integrated into the circular form.

The next stop was Chicago from Sept. 16-20, where artist Emilie Baltz took over Congress Plaza Garden South. The interactive sculpture used metallic strings to create a six-sided harp that was inspired both by the modernist Chicago architecture as well as the city’s famed comedy scene. The strings were intended to reference both music-making and music-playing, with passersby invited to take turns playing the harp themselves.

The tour wrapped up at Grand Park in Los Angeles from Sept. 23-27, with an eye-catching installation from multidisciplinary production design firm Vita Motus. The display blended 3D printing technology with avant-garde industrial materials, with wings nodding to the horror and sci-fi themes. Inside the experience, attendees were first surrounded by a chaotic mix of audio before moving into what organizers called an "aural sanctuary," intended to mix the ideas of dissonance and harmony.

The FX and Creative Riff teams worked together to choose the three artists, looking for ones that understood the vision, were enthusiastic for the project and were willing to collaborate on a shared vision.

“We planned to have each of the three installations showcase different themes, with New York focused on drama, Chicago on comedy and Los Angeles on horror," noted Coan. "When presenting these ideas to the artists, they were full of creative ideas that we relied on to determine how to take the overlying concepts behind each installation and turn it into a realistic but engaging piece of art."

Hardaway said the artists were the key to the program's success. "We knew we needed to identify creative teams that could produce sound art and installations capable of driving interest and engagement. The beauty of each installation drew people in and then they were enveloped by the sound, which really drove the experience," she explained. "We collaborated with the artist on the soundscapes to ensure they complemented the installation and represented the series that served as inspiration for the piece.”

Each outdoor installation was open to the public, and brand ambassadors from FX were on hand to bring passersby in and educate them on the installations. As an added interactive bonus, fans on-site could complete a digital quiz that recommended FX shows for them to watch based on their results.

Coan thinks this type of unconventional, interactive activation is exactly what consumers are looking for right now. “[It's about] finding a unique way to engage with your audience to have them become a part of the activation itself," he said. "This is done by exposing them to a type of art piece that they haven’t seen before, or offering the opportunity to experience it on a physical level. In this case, we worked to combine both. By getting visitors to engage with the actual activation, you enhance their experience by moving the art piece from something to look at to a physical activity that leaves a memory of interaction and sensory stimulation.”

Hardaway agreed that engagement is key, noting the most successful activations provide various levels of engagement that allow visitors to determine how involved they want to be. "We like to build both passive and active experiences when we develop our programs in order to capture all levels of interest," she explained. "SOUNDFX was an art installation, but we encouraged deeper engagement through a digital quiz that gave users an FX Identity profile and recommended shows based on their results that were available to stream on FX on Hulu. The best experiential activations are layered and encourage discovery and sharing.”

See How These Hotel Brands Are Embracing Experiential Marketing

Making Lemonade Out of Lemons: How One Skincare Brand Recently Hosted a Socially Distant Activation

How to Use SEO to Build Brand Awareness

How to Bring Attendees Back to Live Events

Get the latest industry news - from hotel developments to people appointments to legislation, tips and more to do your job better.

We develop quality publications, business events, custom programs and services for event professionals and meeting planners to connect them with places and ideas.